You are here: Home / Railroad Poetry / The Ghost of the Fireball Mail

The Ghost of the Fireball Mail?
Stories of old drinkin’ buddies… 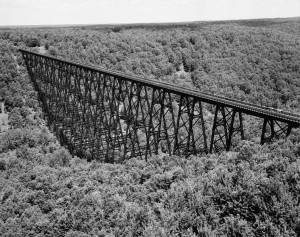 John Willy was a miner,
lived down by the railroad track.
Never had much of nothin’,
his house was a run down shack.
His daddy died when he was young,
takin’ a shortcut on the rail,
caught in the middle of the trestle
by a train called the Fireball Mail.

John Willy, always told me,
when we were drinkin’ in his shack,
“That Mail Train took my daddy
and some day it’s comin’ back.
I know it wants to take me too,
to the stations down the that line,
but I ain’t got no ticket
and that suits me just fine!”

“But,” he said, “late at night
I hear that whistle sound.
Moaning through the valley,
when there ain’t but me around.
The right-of –way’s all tore up,
there’s no train’s  ‘cept in my fears.
That trestle still has it’s tracks,
but it ain’t seen a wheel in years.”

Ah, but then as fate would have it,
one night comin’ back from town.
My old truck blew out a tire
and we were broken down.
Two miles to walk the new road,
the moon’s light about to fail.
Four hundred feet to John Willy’s shack,
‘cross the trestle on the rail.

We heard it first, halfway across,
blowin’ distant on the wind.
John Willy looked up the line
and we heard that sound again.
Now, it was full and loud,
a train poundin’ down the rail.
John Willy cursed and cried out,
“It’s the Ghost of the Fireball Mail!

Across the trestle blazed a headlight,
as it speared along the track,
John Willy stood transfixed in light,
there was no goin’ back.
Understanding rolled across his face,
his eyes were filled with fright.
He stepped out on the tie end
and leaped into the night.

The ghostly light began to wane.
The train faded into mist.
I saw it glide right through me,
my soul felt a mighty twist.
I heard the screamin’ whistle
fade to silence in the vale.
John Willy had at last been found,
by the Ghost of the Fireball Mail.

Now I am an old man,
but it seems like yesterday,
the train swept across that trestle
and took my friend away.
They never found a body,
all who searched would fail.
John Willy’s fate was to ride,
along with the Fireball Mail.

I never told nobody.
Walkin’ back to get my truck,
next day out on the trestle,
I don’t think it was luck,
I found a yellowed ticket stub
stuck to an old water pail.
It was dated just the day before,
one seat on the Fireball Mail.

John Willy was a miner,
lived down by the railroad track.
Never had much of nothin’,
his house was a run down shack.
A workin’ man all his life,
but when called beyond the pale,
he had a first class ticket
to ride on the Fireball Mail!

Return to Index
end: The Ghost of the Fireball Mail