You are here: Home / Fantasy / The Answer Shop

I had been reading Avram Davidson’s 1983 anthology “Magic for Sale”
and decided that I would like to make a “contribution”…
at least to the genre.
The Answer Shop came drifting up out of the dark…

What with the upheavals at home and work, Carl was tired and more than a little distracted. Paul Johnson, his immediate supervisor at work had been piling it on lately. Carl knew it was not just focused on him, the firm was busy and the pressure had been felt by everyone. At home, Claudia was being a complete pain and the overly extended visit by her rattle brained sister Margaret wasn’t helping. Carl had been bringing home more and more work from the office. Finding the peace and quiet to work at night was difficult in their small apartment. Twice, driving to work, he had almost been in an accident because his mind was so focused on the cares of his stressful life.

Lately, he had taken to riding the bus to work. It did give him a bit more time to think without the increment of danger that his distractions had so dramatically revealed to him. The five blocks walk to and from the bus stop provided a sort of buffer and some transition time between his worlds. It seemed particularly so, this evening. The soft winter twilight, with the streetlights just coming on, had left him with his mind floating between where he had been all day and where he was bound.

More importantly, for once he was not in a hurry. He vaguely noticed that he had taken a wrong turn and had, no doubt, missed his regular bus. No matter, Claudia and her sister had announced that they would not be home and there would be no dinner prepared for him tonight. They were off to see some silly movie and he would have to fend for himself. Not at all bad, it meant that he would have blessed quiet and some rare private time to himself when he arrived home. He had handed Paul Johnson the completed Steinbraught Project late in the afternoon and would not begin the next major task until morning, so, for the first time in months, he had no evening work. He took a deep breath and wished it could be like this more often. Why, he might even have time to be happy. When was the last time he had felt happy? He was sure he could not remember. Sometimes, he thought he would have to wait ‘til he died to have time to be happy again.

He found himself, stopped, musing on the sidewalk in front of a small shop which he knew he had never seen before. He was equally sure that he had never walked or even driven on this street. His eyes came to rest on the neat gold letters arced across the front window, it read, “The Answer Shop”. On impulse, he stepped to the door with its “Open” sign, turned the brass knob and entered. The interior was quite small and the indirect lighting was adequate but hardly bright, no more so than the deepening, streetlamp lit twilight he had just left. Not exactly what one might expect in a retail establishment. The air seemed somewhat warm even for the winter evening outside. The few shelves contained an assortment of small ornate boxes, some unusual bottles and a few other objects he could not readily identify. The floor was covered with a deep red Persian carpet. The shop was very orderly and he saw no dust on anything.

Only after assimilating these small details did he notice the proprietor standing just behind the cascading strands of glass beads that screened off the back room of the shop from the public room. The man who parted the beads and stepped out was tall, thin and carried himself with great dignity. His hair was dark but he was obviously very old. Carl thought perhaps as much as seventy or eighty. He was neatly dressed in a black frock coat, dark grey striped trousers and wore a crimson cravat. It idly occurred to Carl that he could have just stepped from the court of Ferdinand the Great in the 1860’s, so was his dress and demeanor. The man’s penetrating green eyes took Carl in at a glance and he spoke with a soft but resonant voice, “Good evening, sir, welcome to The Answer Shop. If I may be of service, please call.”

“Excellent,” said the old man, “perhaps you will find here, that which you seek.”

“Uh, maybe so,” said Carl. “I had nothing special in mind, I was just curious. I don’t think I have seen this place before.”

“Many have not,” answered the tall man, “only those few whose need is ripe will find me.”

“Ah,…yes,” Carl said, again casting his eyes about shop and preparing to turn for the door. “I don’t really see anything I need just now.”

“No?” questioned the old man. His green eyes narrowed as he spoke. They seemed to pierce deep into Carl’s mind and Carl was taken aback with the surge of power he was sure he felt. “Need?” chided the man, “what do you really want?”

“Happiness,” said Carl, without thinking. “I just want to be happy!”

“Happiness is it,” queried the tall old man? “What then is happiness to you sir?” he asked.

“Why, it would be a long rest and a cessation of all this strife, pressure and turmoil with which I have been smothered these past years. Sometimes I wish it would all stop. Then I would be happy!”

“So,… and what would you pay for this happiness,” questioned the man, his eyes holding Carl’s. “Your fortune, a pittance, what could it be worth?”

“I guess I never thought about buying it! What’s the old saw, ‘you can’t buy happiness,’” Carl laughed mirthlessly. “Can’t buy my way out the box I’m in.”

“If you could, would you pay my standard fee?” said the man in the red cravat, his green eyes alight.

“What is it,” asked Carl, “a million dollars, my soul, my first born? I mean, not that I’ll ever be able to afford a child.”

“Sure,” said Carl, impulsively reaching for his wallet. He pulled out a ten and handed it to the old man. “Do I get peace and quiet with that?”

“Indubitably, you shall sir,” said the old man, deftly plucking the bill from Carl’s outstretched hand. He strode across the small room selected an object from a shelf and passed through the glass beads into the back room, saying, “I shall be but a moment.”

Carl stood rooted, staring into his wallet. ‘My God,’ he thought, ‘I’m losing my mind. What in the world am I doing?’ He thought about just walking out and trying to forget just how silly he’d been, but what the hell, the money was nothing and the old man seemed sincere. Might as well just let it all play out.

The old man pushed back through the beads and walked up to him, handed him his change and a receipt. Carl put the whole handful into his pants pocket and took the neatly wrapped, string bound package from the old man. It was surprisingly heavy. Carl was mulling this as the old man took him gently but firmly by the arm and steered him to the door. Opening the door with his other hand he maneuvered Carl onto the street, bid him a short “Thank you and good evening” and then closed the door. Carl found himself on the darkened street, the shades pulled in the door and window of the shop and the sign reading ‘Closed’.

Carl looked up and down the street and noticing that the brightly lighted street at the far end of the block looked like the street his bus ran on, walked in that direction. His regular stop was on the corner several blocks to the right. He rode home on the bus with his purchase sitting on his lap and trying to figure out just how he’d let himself be maneuvered into the whole thing. What could be in the package that was so heavy? He reassured himself by deciding that he’d spent less than ten dollars even if it was a box of sand.

When he got to his home stop, he descended from the back door of the bus, went into the deli on the corner and bought a small sandwich for dinner. That and a bottle of beer and he’d be fine for the evening. He could inspect his purchase at his leisure. He opened his door, turned on a light and found his way to the kitchen. He put the package on the table, got a beer from the refrigerator and sat down to eat. Between bites and slugs of beer, he untied the string and opened his package. Inside was an ornate box. Not a jewelry box but what his grandmother would have called a casket. Deeply carved and bound in brass strips held by small nails. The lock was a hasp style closure with a heavy brass hook pinned to the box so that it swung through the loop. On the top of the lid was an exquisitely carved death’s head. ‘Great,’ he thought, ‘now there’s the symbol of happiness if I’ve ever seen it. Just about right for the treadmill I’m on!’

He sat, staring at the box, finishing the sandwich and the beer. Delaying opening his prize for the moment, he got and opened another beer from the refrigerator. Claudia and her sister wouldn’t be home for at least another hour so he could take his time. Besides, if the box was only filled with sand as he suspected, his “Happiness” would be short lived. When the second beer was nearly gone, he stood up, flipped the hook from the hasp and opened the box.

It was empty! He stared incredulously, how could an empty box be that heavy? Nothing, for his six-fifty and tax! Remembering, he reached into his pocket and pulled out the change and receipt. There on the table he laid out three, now wrinkled, crisp one dollar bills, a quarter, a nickel and four pennies. The receipt was a blank piece of paper. Nothing for his money! Well, not exactly true, he did have this unusual box which was probably worth the money, but happiness? What a joke!

Then, his attention was drawn back to the box. Inside, seemingly floating in air, was what appeared to be a large smoldering ember, pulsing rapidly and giving off an evil smelling, mist-like smoke which soon overflowed the box, spilled off the table and onto the floor. As he watched, fascinated by the phenomena, a dark figure arose from the cloud of mist and rapidly coalesced into an all too recognizable form. Dressed head to toe in a midnight black cowl, he could see the naked skull with its empty eye sockets staring out at him. “What the hell,” he shouted, “what’s going on here?” “I bought happiness!”

“Yes, what the Hell indeed?” said a voice from the fleshless throat, “A long rest and a cessation of all strife, pressure and turmoil with which you have been smothered these past years. Did you not wish it would all stop? Did you not declare you would then be happy?”

“You paid,” said Death as the scythe raised, “and I have come!” 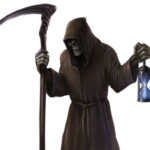