You are here: Home / Uncategorized / Doc and the Bear

Not exciting prose, Doc and the Bear was written
simply to have a quick memory of the event.
It was, indeed, a FUN one…! 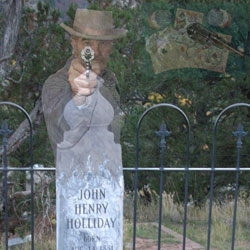 Friday evening; just before the first Ghost Walk of the season. The afternoon rains have stopped, although still somewhat threatening. We are undaunted! We have played in the rain before. Moreover, we ghosts have observed that such weather does not seem to dampen the determination of the living to commune with the dead, at our annual offering. Being in our spirits and ready to commune, we decide that it will again be so tonight and with a slight addition of mud, things should proceed normally.
Holes open and close in the clouds and the moon occasionally pierces through, only to vanish moments later. Roily and low, the clouds will soon be lit from below by the city lights just beginning glow in the twilight. The soft, moist, autumn air is not too cold for comfort, nor too warm, such that one would overheat with a bit of exercise. A perfect night to meet the spirits at Linwood Cemetery!
I don’t recall if it rained again, if so, not much and all three evening shows went well. I wasn’t doing Doc at his grave site that weekend. I was giving a quick intro at the bottom of the hill and seeing the groups off with their guides. Shortly afterwards, I would start after them in the dark; far enough back so they couldn’t hear my spurs but close enough for me to keep track of the Guide wearing the glowing green collar, riding drag. Part way up, I would take a cutoff trail that angles sharply up the hill to Doc’s grave. Then, I could walk up the path through the cemetery; my fellow ghosts keeping track of my progress by the jingle bobs on my spurs; and I would end up greeting the group as they came up the entrance trail to meet their first welcoming ghost. When asked how I could be at the top of the hill before they arrived, Doc always told them, “I have other means of travel at my disposal, different, from mortals on your plane!”
I was glad that it wasn’t so slick, such that it was unsafe to do this fun little thing! (The Ghost Walk prides itself on the sometimes funny and sometimes serious asides that we add to the show.) It also allowed me to catch a number of the other ghost’s performances before I had to go down to start the next tour. Our well known, Ghost Walk funny bone must have been what caused me to hike the hill so many times that night, mostly on that steep little trail. Doc’s trusty cane and I, out there stumbling in the dark!
I started my evenings exercise by escorting Ms Charlotte up to her tombstone. We have walked up that main path to Linwood many times over the years to Ghost Walk performances; a nice little personal tradition, with a great lady. Then, back down the same way to meet the first group of guests. At the beginning of each show, I did the Intro and the above mentioned routine; three times up the back trail and down twice in about three hours.
At the end of the evening; all the ghosts gather at the torches where the path turns down to the cemetery gate, to howdy and shake with the guests from the last tour as they come down the hill from God’s Acre. Due to the rotating performances, the last one is the only tour which allows this; it’s the only chance clients have to speak a moment with the ghosts. I think everyone enjoys this little extra treat.
Then, crew and remaining cast usually go pick up lanterns, reflectors and check for forgotten items. Collecting everything at the truck to load and take back down, because the cemetery is public the next day.